Every year the local old car club, of which Grandpa is president, puts on a Spring Ramble and this year we actually had a spare weekend to roll out the MG. I managed to get away from work early enough on Friday so we could get to Goulburn before dark. The others had left in the morning and had a very leisurely drive. We kept off the freeway and away from the big trucks and toured down through the Southern highlands.

The weather had finally decided to give us some rain which was badly needed but it wasn’t too heavy. Saturday morning, the sun was dazzling in the morning when I opened the door but nice and cool so we needed plenty of layers when we set out for the day with the roof down. There was a mix of old, not so old and relatively new cars, six in total. The organiser outdid herself with baking for morning tea so not long after breakfast we had lots of choices of cake.

There is a sock factory at Crookwell in case you didn’t know, making the nicest warm woollen socks. They showed us the machines and they are the most incredibly complicated looking. The next day there was a swap meet in town and some fellas were keen to be the first to check out any bargains but we headed to the next little place, Laggan to check out their markets. We didn’t expect much but there were plenty of bargains and lots of baking and crafts and nic-nacs for such a little town. So quiet and slow too, very relaxing.

By the time we got back to Crookwell, it was time to think about lunch! So we checked out the bakery which is always closed on Sundays when we pass through. Then after lunch it was off to the Railway museum down the road. A very small band of volunteers are trying to restore and preserve the remains of the station, some track and a few little railway trolley gizmos. 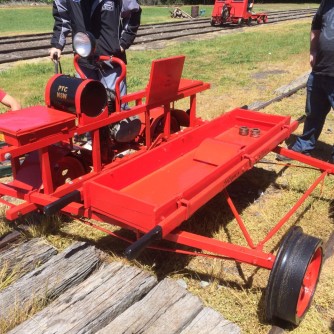 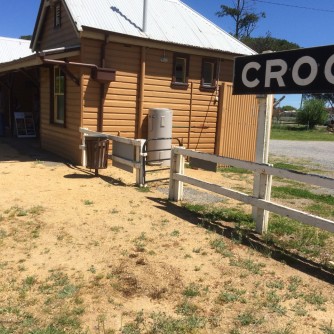 Then it was back in the cars along the more scenic route back to Goulburn. But first a stop for afternoon tea, what a life!

Sunday was back to cloudy and a bit gloomy but we set off south along some more back roads towards Gunning. We stopped at a little place called Merilla or Parkesbourne at the church hall and had another morning tea. A young girl living nearby gave us the short history of the little school house up the road which is now closed and that was about the sum of the place. It is so close to the freeway but a whole world away in sheep paddocks and dirt roads.

It was time for us to be scooting back home to work on Monday, not like the lucky retirees.  So we enjoyed our last  few miles on the lovely quiet back roads and startled one of the biggest Wedge-tail eagles I have ever seen, massive.

We got home in time to find that even though it had only rained a little bit, it was easy to pull some weeds out of the garden, then we put our feet up on the verandah and had a beer. Cheers.

It was great to be able to organise a four day weekend and join the pensioners. The Cooma Monaro Historic Car Club runs the Girder Fork rally for the old bikes in October but last year started a rally for pre-1960 cars. Well, we now have the MG and haven’t taken it for a long run, so we were in. Some friends and club members were going also, so there would be lots of chat whenever we stopped for cuppas and fuel.

We left the Top of Razorback and followed the side roads through the Southern Highlands avoiding the highway as usual. The weather was great and the car was running like a charm. How sweet it is to have a Friday off, it feels more special.  I had spent quite a bit of time thinking about an outfit to wear in the MG 1936 style. I have my grandmother’s rabbit fur, culottes which are better for getting in and out of the car (and which are actually in fashion at the moment) and a cute hat leftover from my chemo episode. 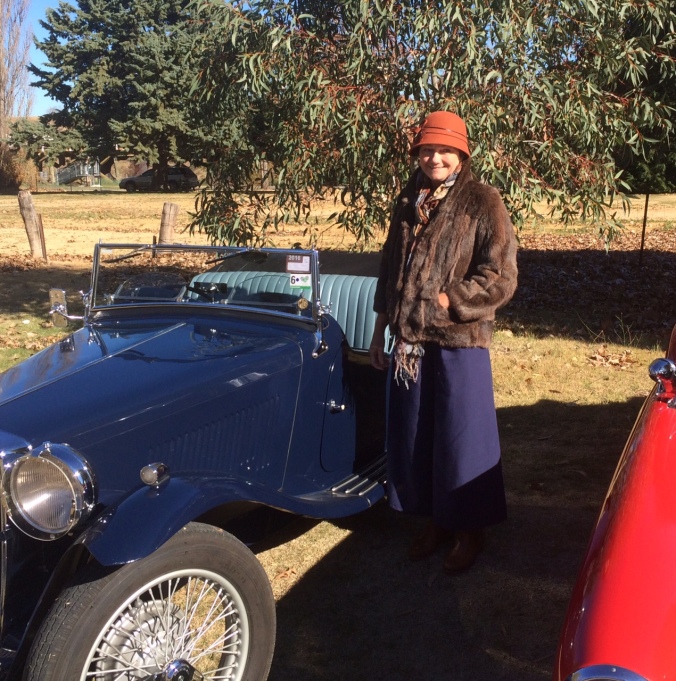 There were five cars, our MG TA, an MGA, Chrysler, Model A Ford and Morris. We tried out some bakeries and cafes along the way at Exeter and Bungendore, travelling on our stomachs as usual. We arrived at our motel in Cooma to hear that one car had collided with a kangaroo who sadly didn’t live to tell the tale.

Saturday morning dawned rather frosty and chilly. It soon warmed up after we set off on our run to Dalgety and Bombala, so we put the roof down to really enjoy the whole day. Another wildlife encounter saw the MGA narrowly miss a feral deer. At the lunch stop there was voting for your favourite car and later at the dinner., guess whose car was voted #1 car of the rally, OURS. Can’t argue with that.

Sunday was just a short run to Berridale to finish the rally for those heading home today. All of our group were staying til Monday, so we kept driving to Jindabyne, back through Dalgety then a back road to Cooma. We love this road through wide open Monaro plains and bushy hills.

It also goes through what must have been an old settlement, with a lovely old church and a very impressive house which just happened to be for sale at the moment. The little car looks good parked outside, doesn’t it? 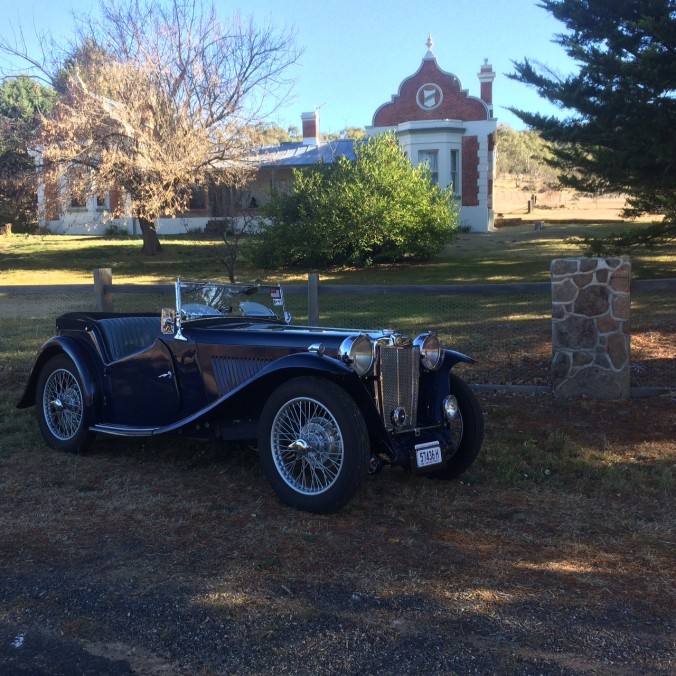 Monday morning was frosty again and we left earlier so it was a bit chilly. I started thinking about how cold it will be on the bike when we leave on our BIG trip. It sooned warmed up though and we had another trouble-free run home. What a great little car, it only used about 2 litres of oil the first day, but it is still running in…