Grandpa has always loved motorcycles and me and sidecars. We have had a few sidecars over the years and I must admit that they are fun and at times, much more practical than a motorbike. We got our first sidecar, a Goldwing 1000, when I was pregnant with our eldest, when for some reason we didn’t have a car. Luckily, we got a car before the birth especially as a friend crashed the Goldwing into a tree, so that was the end of that one.

The second sidecar was purchased in 1979, as a trailer load of bits of multiple Indians. Over many years it was restored into a monster of a motorcycle and still lives today. We have done many miles in that and it was at one time the ‘everyday ride’. We would pile the kids into it and go for a picnic on Sundays, as we couldn’t afford to do anything else.

Then there was the classic racing scene that another friend got us into. His father had an enviable collection of vintage and classic bikes that would make many a man drool. He had a spare 1939 Norton 500 that ‘would make an excellent sidecar ‘big wheel’ outfit’, particularly when fitted with a JAP speedway motor.

Now, long before this, we had taken a few trips to Winton, Victoria to be corner marshals at the Southern Classic races and I was amazed at all these old blokes on old bikes blasting around the race track like there was no tomorrow. Then there was the sidecars. Wow, that would be fun, I thought to myself.

So, move forward a few years and there we were at Oran Park, Amaroo Park and the inaugural meeting at Eastern Creek around 1990 with me hanging on for dear life down the main straight with the vibrations so bad I couldn’t actually hang on. I had to keep making sure that I wouldn’t shake back and fall of the back of the platform. Then we went back south for the Southern Classic, as entrants this time to Broadford. We came third and I got my only piece of silverware as a trophy. Ten laps is a long way around any racetrack, especially sliding around all the right handers.

Family life took over then, so thankfully racing was put on the backburner.

After spending so much time and money on motorcycles, we finally bought a house for our family. But Grandpa still had to get to work and ever since I had known him, he had lusted after a BMW R100/RS. That, he decided, was the only bike he could have to get to work on. So a family loan and a trade-in meant that he could finally have his wish. This was fine for a couple of years. We always had shiny bikes (as you can probably guess) and crappy old cars, not worth a cracker. Then one day, we decided to go for a holiday to South Australia. Now, the old Holden wouldn’t make it and we only had a motorbike. How could we have a family holiday?? Guess what we did! Put a sidecar on the BMW. 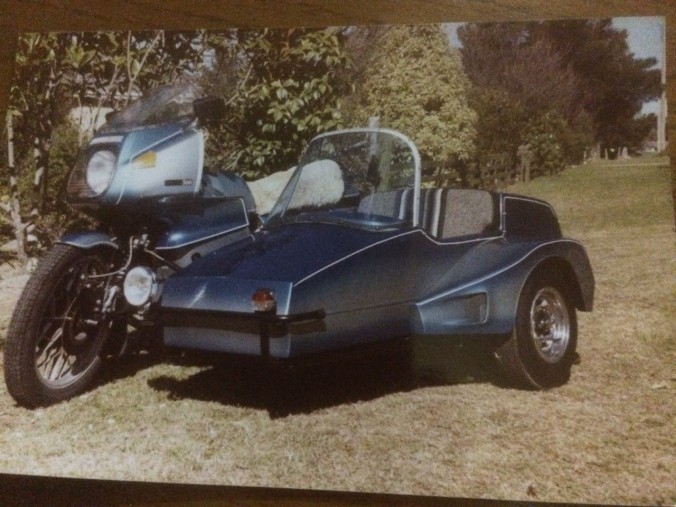 A small fortune was spent on changing the front end, brakes, suspension etc and adding a HRD sidecar and we were off. Now this was something different, riding a motorbike which wasn’t really a motorbike on the road and all the way to South Australia. Not to mention what the kids thought about it. We had all the mod cons, a gas bottle, a tent and some clothes. What else would you need? We had fun, not sure about the kids. We cruised through the Adelaide Hills and the race track at Mt Gambier and back home again.

The next trip was better, up through the middle of Queensland. We went to Lakeside, Mt Morgan and the Beef Road, somewhere between Dingo and Middlemount in the middle of nowhere. The kids were really impressed about that, stopping on the side of the road and telling them we had broken down. How cruel! 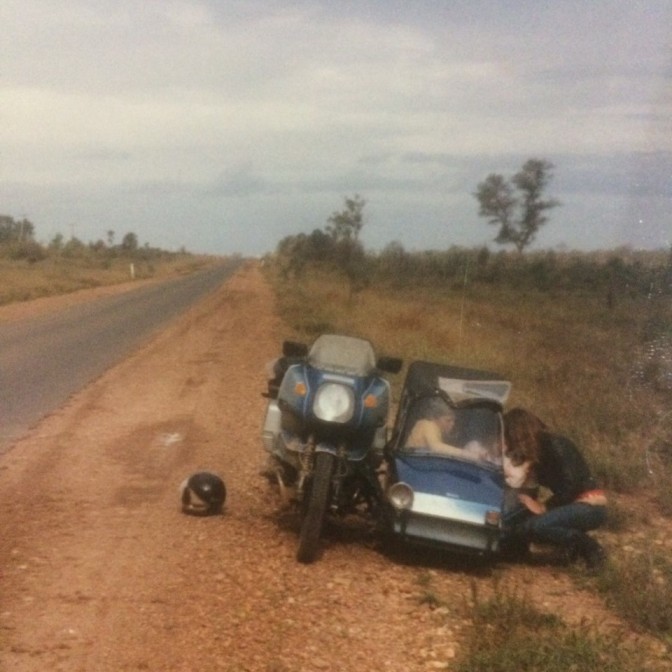 Child number 3 made it a bit difficult to all fit into the sidecar so it had to go, sadly. But moving forward, as they say, to 2018 and Grandpa now has a shiny new Ural outfit with reverse gear no less. What adventures we can have now. Travel the outback and to work, wherever! It is very comfy, I have tried out the sidecar seat already and will one day learn how to actually ride the thing. Yeehah!